Back to Timberframe News

A new barn in Geyserville 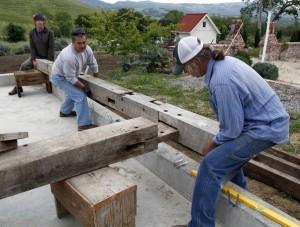 Josh Chandler, a winemaker, architect and general contractor, last week began putting together the 1909 Midwest barn on his eight-acre ranch.

His acquisition is part of a movement to save antique, hand-built barns, considered a slice of American history. Valued for their Old World craftmanship, they represent a vanishing era of family farms.

“It’s a part of American heritage. If I can bring this to me and save this, rebuild it so it lasts another 200 years, it’s better than removing, or burning, or turning it into flooring,” Chandler said Thursday.

The barns, he said, “have appeal that’s both beautiful and historic.”

With the help of a mechanized “reach lift,” he and three workers, including two expert framers, had just erected the timbers that will serve as one side of the barn.

Ever so gingerly, the structure was raised and lowered onto its new foundation.

The wood outline served as a huge picture frame of sorts for the backdrop of green hills, blue sky, white puff clouds, and Geyser Peak.

Chandler rhapsodized about the uniqueness of the pine and oak timber frames.

“There is a guy who hand-cut every piece of wood, way-back-when, with a saw,” he said, noting “the effort and the labor and what has happened in the barn.”

He compared it to the floors in churches and cathedrals in Europe, worn smooth through the centuries by those who trod and worshipped inside. “How many people, how many families have been in this thing?”

Once part of the Seghesio Ranch, the Geyserville property has another 1909 building — the stone Chianti winery that Chandler refurbished with a new roof and other modern upgrades.

He and his family live in an adjacent 1905 farmhouse and named their place “Hillend Farms and Vineyards.”

The output from his cabernet and sangiovese grapes will be a relatively minuscule production of 2,000 cases maximum. But he also produces honey, olive oil and fruit from 100 trees and sells his products at farmers markets.

Early in his career, Chandler, a St. Helena native, trained as a chef at the prestigious Auberge du Soleil in Napa Valley. He embraces the locally grown and slow food approach and sees his transplanted barn as part of the aesthetic.

He intends to use the rebuilt Iowa barn as part of his winery: for production and storage, a lab, and a walk-in cooler to store meats and salamis.

By the time it’s complete, he estimates the restored structure will have cost him $440,000, comparable to what it would take him to build a similar-sized building employing standard construction.

Each piece is numbered and fit together in sequence. “It’s a bit of a jig saw, tinker toy set,” Chandler explained.

The barn is “post and tenon,” joined by wooden trunnels instead of nails.

Because of seismic issues in California, he said the sides of the barn will have a “structural insulated panel system,” basically insulation bonded to recycled plywood. Then it will be covered by the original siding, but repainted. He estimates it will be complete by summer.

He is using just part of the original building, which was known on the Maier Barn and featured on the website Iowabarnsavers.com.

The larger portion is being eyed by one of his architectural clients, who is interested in making it into a residence.